Developer tool with an integrated parser generator, a c++ interpreter and a debugger in a visual development environment for the analysis, extraction and transformation of texts - also available as freeware with restricted features.

Hamburg, December 15th, 2005 - The newly released product TextTransformer 1.0.0 presents itself after three-year development time as a mature developer tool for the construction of individual programs for the analysis, extraction and transformation of texts. The program offers a visual development environment (IDE) with an integrated parser-generator, a c++ interpreter and a debugger. The range of applications reaches from multiple word substitutions, extractions of information, syntax check, calculations and evaluations of data records up to complete translations from programming languages or developments of scripting languages. Also smaller daily tasks, as the counting of words or the rearrangement of lines of texts are handled fast and easily.

TextTransformer is worldwide the only program conceived for both the development and the execution of programs which analyze a text and synthesize a result.

For this the parser generator produces recursively descendent parsers with an arbitrary look-ahead possibility. Elementary text sections are recognized by regular expressions and these are connected to a grammar as quasi Meta regular expressions. The TextTransformer isn't restricted to formal languages unlike other parser generators but copes with any text structures; unspecified sections simply can be skipped.

To define how the text sections are processed, the designed parser can be extended by semantic actions for a transformation program or a translator. A simple c++ interpreter permits the synthesis of the recognized text sections to a new text or a numeric evaluation of the text contents.

The convenient debugging has to be emphasized: the parsers can be tested stepwise or stopped at breaks in the source text or in the grammar. I.e. the professional developer has the possibility of concentrating fully on the development of the grammar of the parser since testing without a previous compiling is possible. The processing step-by-step shows which text section is recognized next by which grammatical branching.

But that's not all: grammar tests and a syntax check of the interpreter instructions are carried out automatically and the error position is shown by a mouse click. With the transformation manager or the command line tool ready projects can be applied to file groups. The professional version of the TextTransformer can export a ready transformation program even as a c++ code, which can be included into other software products.

"The range of the possible applications with TextTransformer is very versatile", so Dr. Detlef Meyer-Eltz, the developer of TextTransformer, "The program is suitable for individual problems for which there otherwise aren't any prefabricated tools: Whether conversion programs for special formats of health insurance companies or other enterprises, log-file analyses frequently needed by system administrators or contents-related text analyses, such as a tension analysis of a novel."

The software is suitable as well for the educational purposes: Pupils and students can easily and practically learn by it, how a programming language works. For linguisticians TextTransformer is a tool to carry out text statistics and students of other faculties can make arbitrary data evaluations.

TextTransformer 1.0.0 has a comfortable user interface with syntax highlighting and immediate localization of errors. The rule repository is organized like a database, where scripts with definitions for tokens, productions, and class methods can be inserted, deleted or changed. A detailed context sensitive help, a tutorial and various wizards help the user with words and deeds.

The standard version (with transformation manager and extended interpreter) can be downloaded as a 30-day trial version under http://www.TextTransformer.com/downloads/TetraInst_en.exe. As soon as the test period has passed, the functionality is adapted to the free version.

In the free version the features of the standard version are restricted, however, it has almost all possibilities of analyzing texts and carrying out simple text manipulations. It can be downloaded here: http://www.texttransformer.com/downloads/TetraInst_en.exe

Further information about the versions, the PDF manual etc., you find at: http://www.texttransformer.com/Downloads.27.0.html

Further technical details on the IDE, the parser-generator, the interpreter, the debugger or code production (only the professional version) you find at: http://www.texttransformer.com/Technical_details.32.0.html

Pictorial material like product logo and screenshot is in our press area under http://www.texttransformer.com/Press_service.87.0.html provided for you.

Dr. Detlef Meyer-Eltz has been working for many years as software developer in different employments (measurement data evaluation, tabulation software, workflow application, artificial intelligence). He is an independent developer since 2002. After more than three-years of development version 1.0.0 of the TextTransformer could be published. 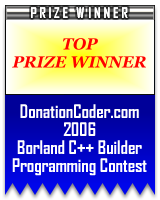